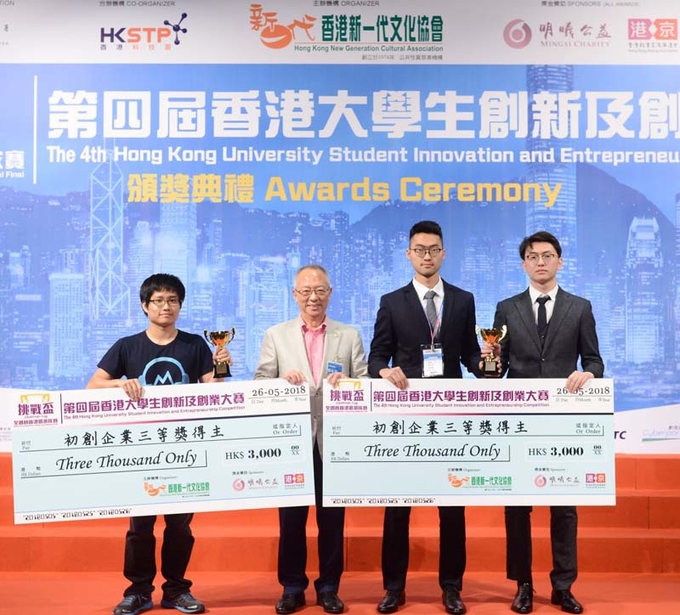 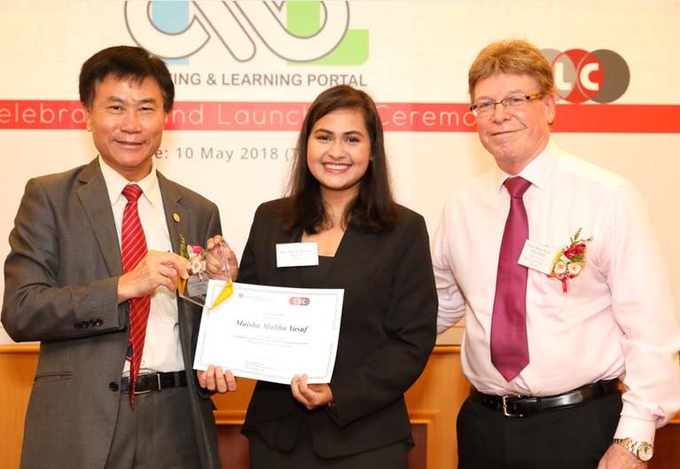 Maisha Maliha Yusuf was the sole recipient of the Outstanding (Student) Contribution to Outcomes-Based Education Award for the 2017/18 academic year.  The Award was presented to her by President Leonard K Cheng on 10 May at the TLC Teaching and Learning Portal Launching Ceremony for her services to the Student Consultant Programme. 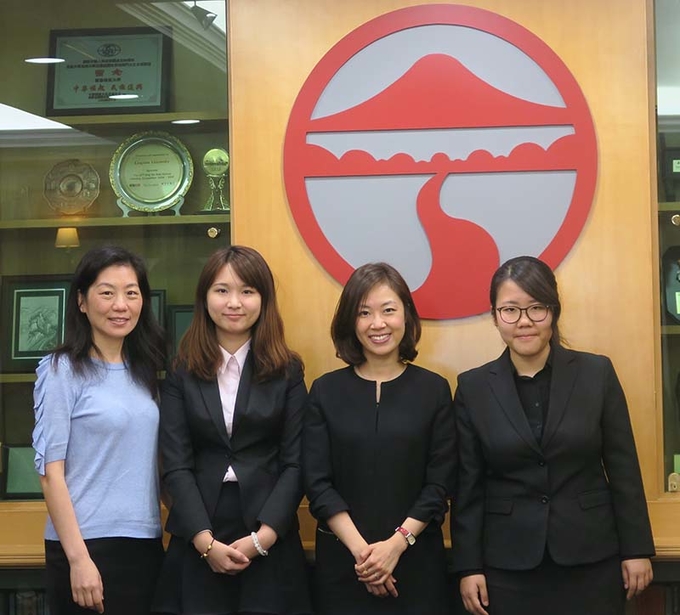 Eight scholarships were awarded to support students participating in overseas or Mainland exchange programmes for one semester in the academic year 2016/17 and 2017/18 by Chow Tai Fook Charity Foundation.  The scheme had enhanced students’ academic knowledge and communication skills, and enriched the quality whole-person education they experienced through cultural exchange. 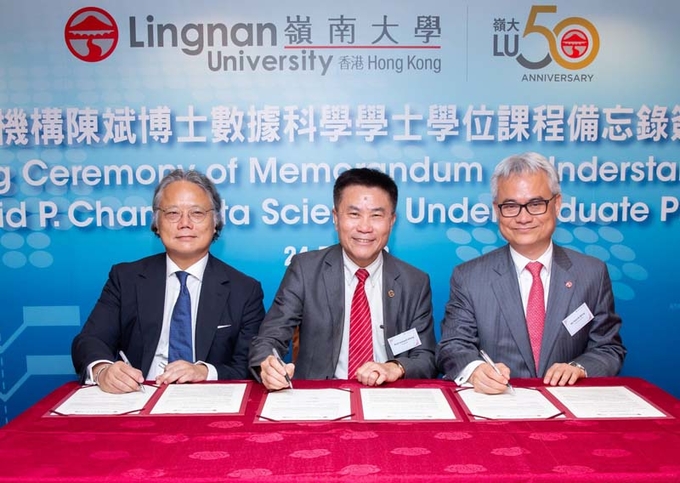 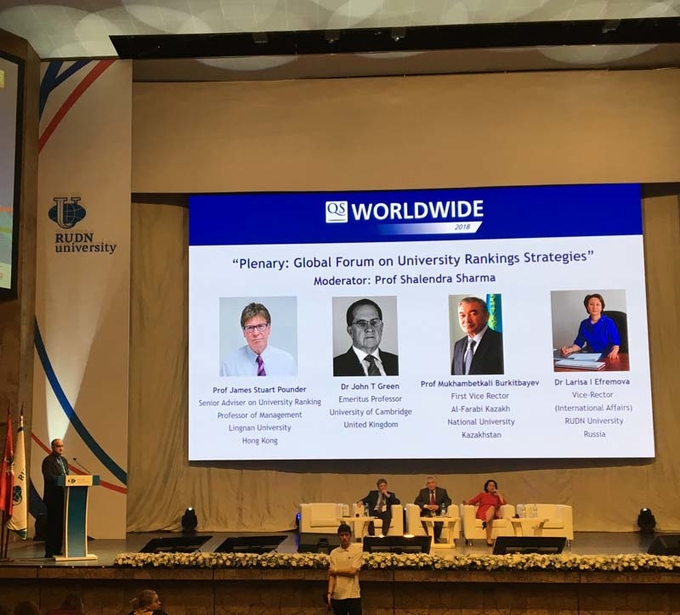 Prof Shalendra Sharma, Associate Vice-President (Academic Quality Assurance and Internationalisation) and Prof James Stuart Pounder, Adjunct Professor, Office of the Faculty of Business participated in the “QS WORLDWIDE 2018 2nd Annual Strategic Summit for the Advancement of University Excellence in all its Forms” from 22 to 23 May at RUDN University in Moscow, Russia. 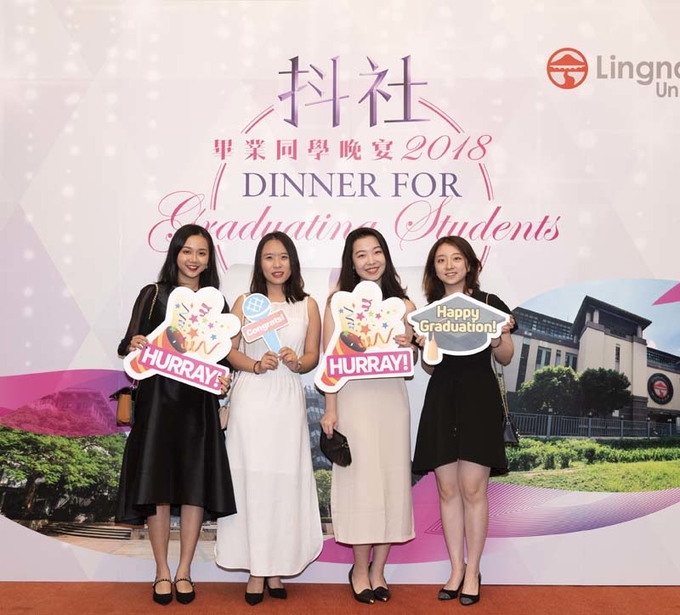 The Dinner for Graduating Students is a fine tradition of Lingnan University and this year marks the 20th Anniversary of the event.  Over 350 graduating students, staff and guests of Lingnan attended the Dinner held at Kowloon Shangri-La Hotel on 21 May.  All were delighted to share the graduates’ happy and memorable moments during their study at Lingnan over the past few years. 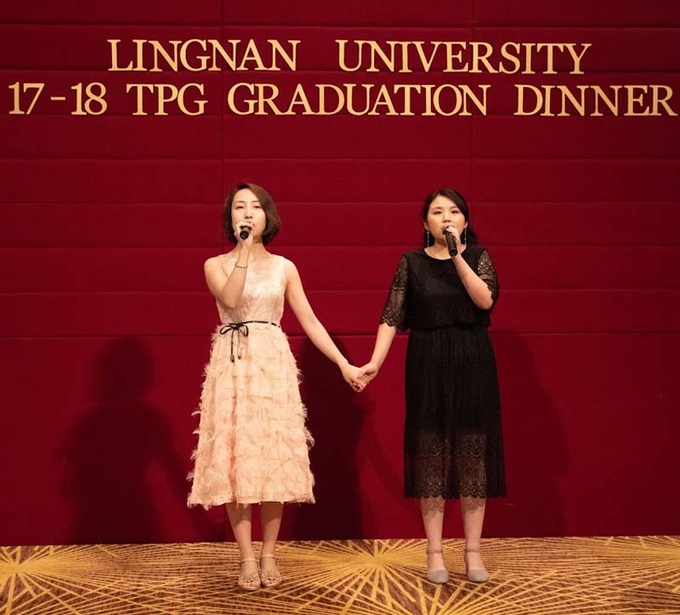 The Division of Graduate Studies organized the Taught Postgraduate Students Graduation Dinner 2017-2018 on 16 May 2018 at Cordis Hotel. The dinner was well-attended by 280 Taught Postgraduate students and faculty members. After making his speech, President Professor Leonard Cheng and Vice President Professor Joshua Mok led the toasting ceremony with faculty members and students and wished students all the very best with a bright future. 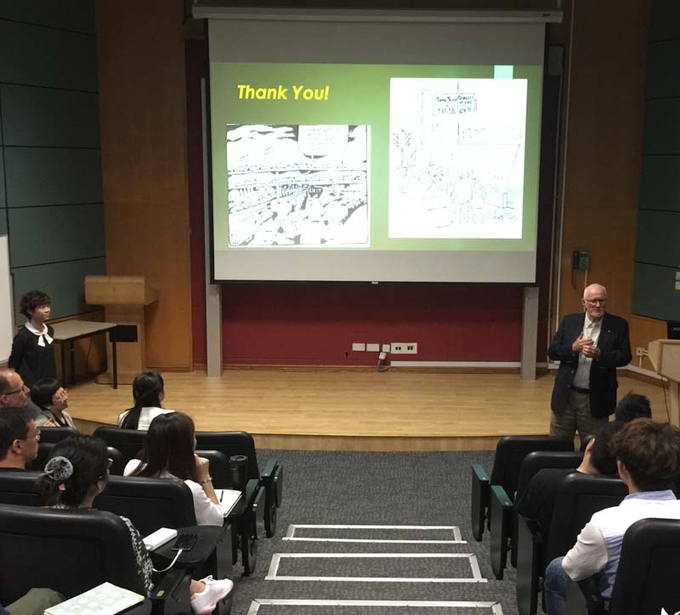 A science seminar “The Quality of Urban Life: What It’s About and How We Measure It” under the Visiting Science Scholar Seminar Series 2018, organised by the Core Curriculum and General Education Office and Science Unit, was held on 10 May.  It attracted around 50 participants including Lingnan students and staff, researchers from other Hong Kong institutions, secondary school teachers and elderly from Elder Academy. 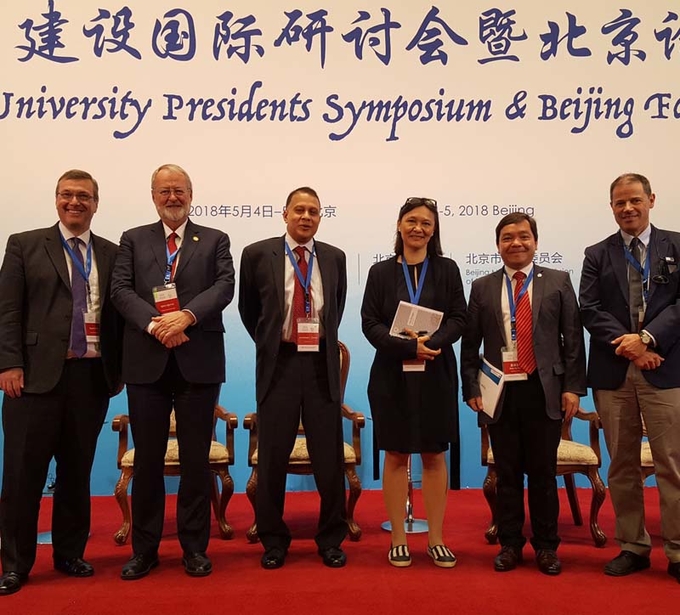 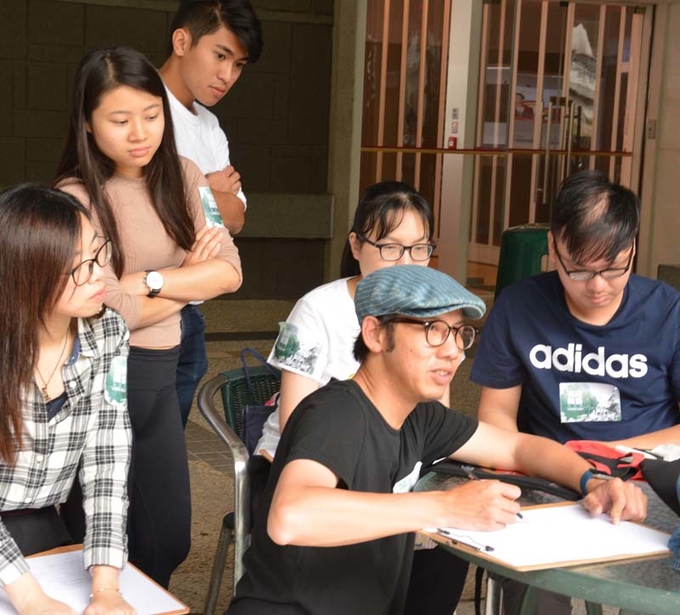 Two “Sketching Lingnan” tours under The Art of Szto Wai Exhibition Activity Series were held on 28 April and 26 May respectively.  The tours provide an opportunity to commemorate the indelible contribution of Mr Szto Wai (1889-1961) to Lingnan.  Mr Szto is a distinguished Lingnan alumnus and former faculty member, and the designer of the Lingnan emblem.  Many of his watercolours depict Lingnan’s Guangzhou campus during the 1930s and 1940s and convey a pictorial history of Lingnan during the Sino-Japanese War. 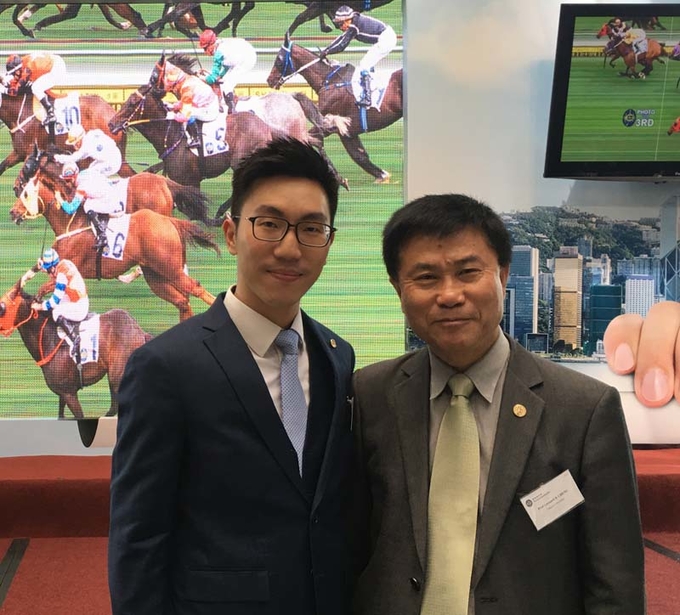 To celebrate the 20th Anniversary of the Hong Kong Jockey Club Scholarships, President Leonard K Cheng joined the 2018 Community Day Race Meeting on 21 April at Sha Tin Racecourse together with over 200 representatives from the Club’s tertiary education and community partners and past Jockey Club Scholars. 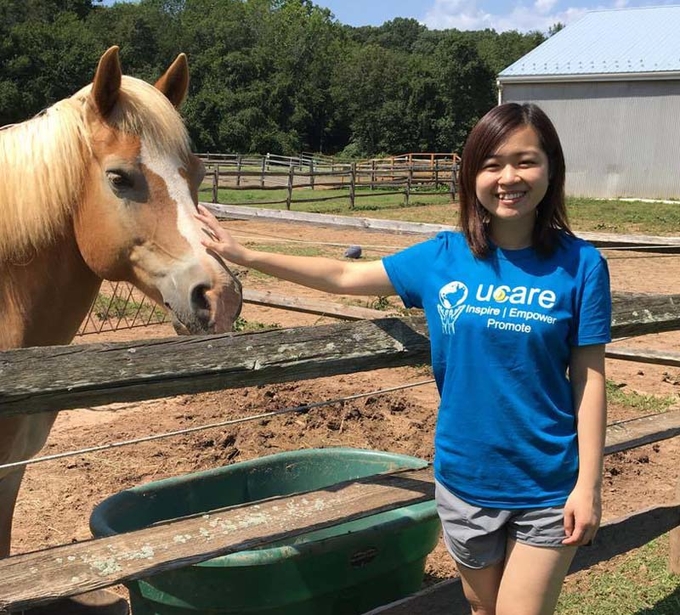 When it comes to May, a new batch of fresh graduates is ready to turn a new chapter of their life. Among them is Chan Yim-kwai, a year-four student of Translation who has received the Dr and Mrs James Tak Wu Award for Outstanding Service (Student Award) in recognition of her strong commitment to serving both the University and society. 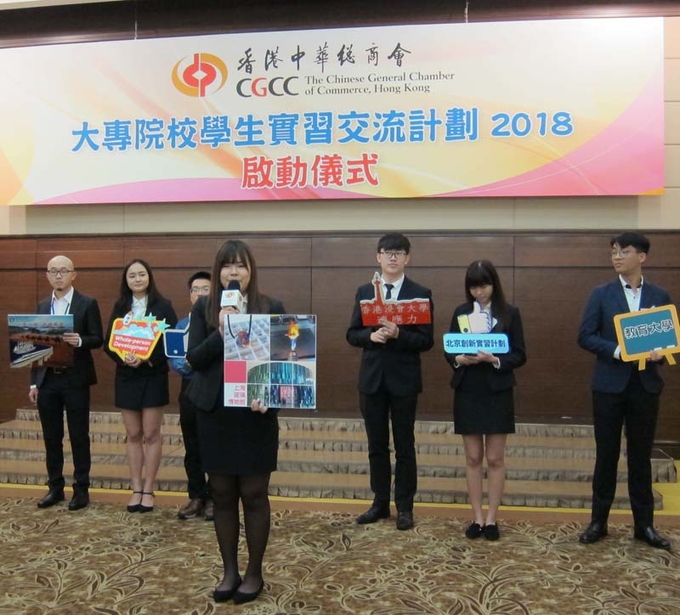 Twenty-eight Lingnan students will participate in the 8-week “The Chinese General Chamber of Commerce (CGCC) Mainland Summer Internship Programme” in Shanghai from late May to July.  They will witness the spectacular development of Shanghai, and experience the lifestyle, work culture and business operations in the Mainland to broaden their horizon. 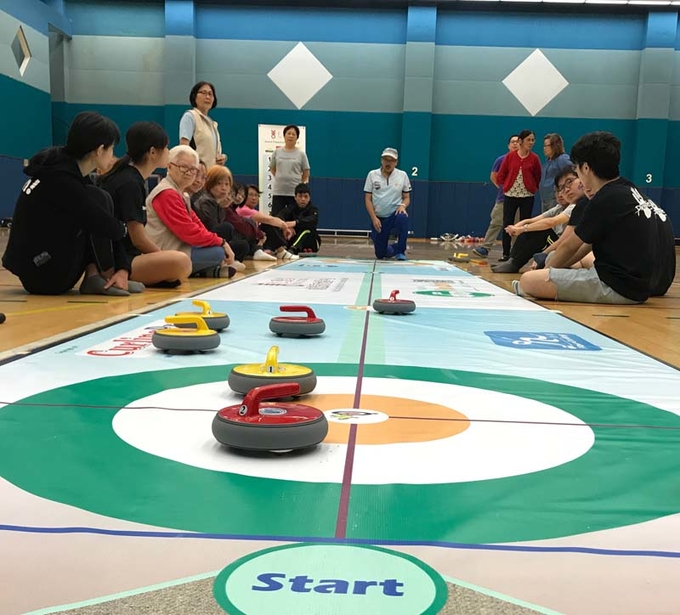 The World Health Organization (WHO) emphasises that lifelong learning is not only an important idea to the concept of active ageing, but also to encouraging the elderly to actively make contribution to the society.  Under the Jockey Club “We Care, We Serve & We Learn @ Tuen Mun” programme, the Office of Service-Learning (OSL) and Yan Oi Tong implemented a cross-disciplinary and intergenerational collaboration approach to co-organise two events in April and May.  The objectives are to improve community engagement of the elderly and enrich their learning experience by conducting different activities related to physical and mental health.