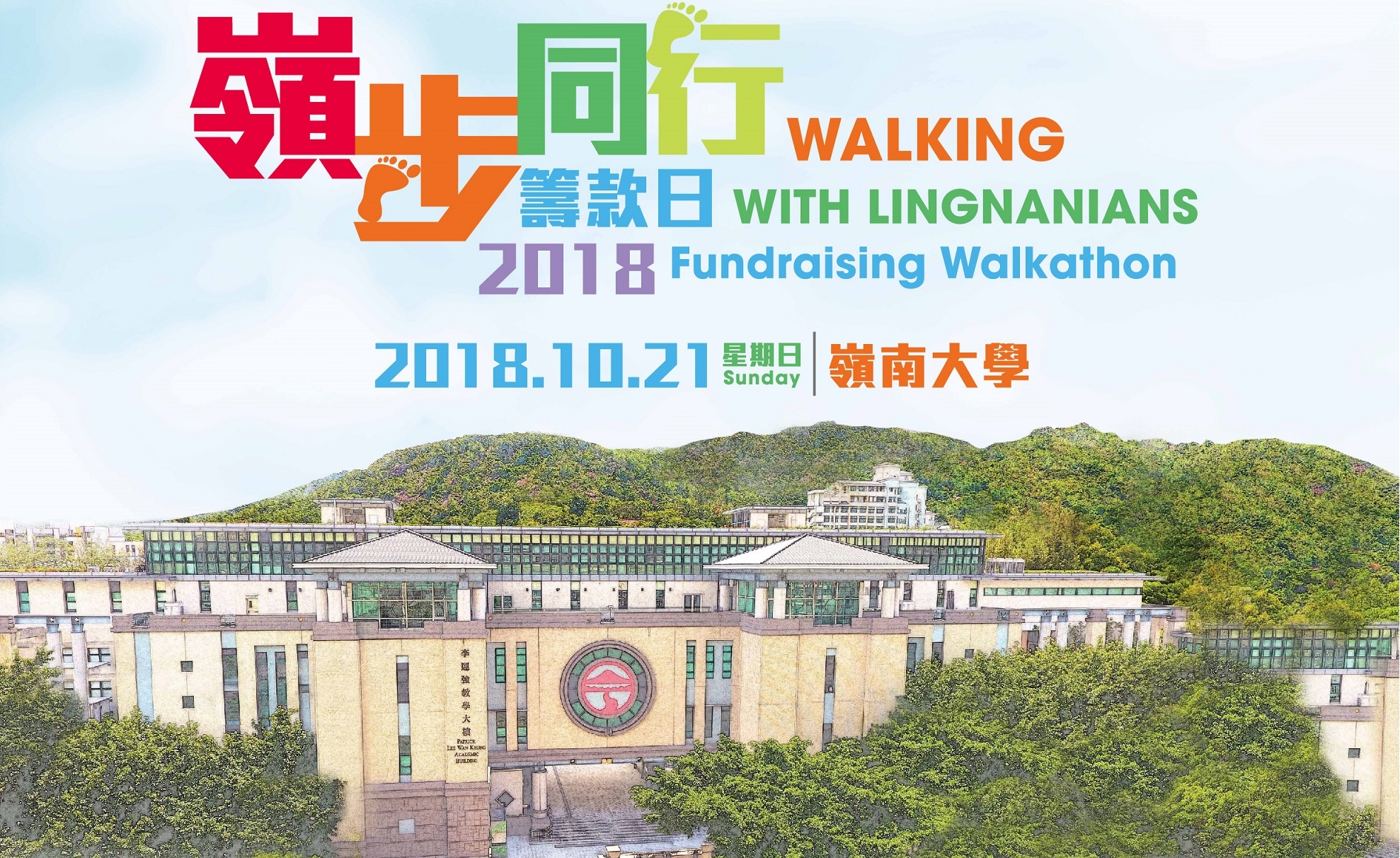 Over a thousand participants take part in the Lingnan Fundraising Walkathon

The annual “Walking with Lingnanians” Fundraising Walkathon was held on 21 October with over a thousand students, teachers, alumni and friends of Lingnan University participating the event. The donation of this event was raised for the University development and provides financial support to students in need, especially those being the first generation in their families who receive university education to enjoy all-round student development programmes.

“Graduation Bear Donation Campaign” is an opportunity for commemorating your graduation by giving back to your alma mater.  Your donation will help your alma mater’s development and support the future students.

Upon donating HK$200 or above, a Lingnan University Graduation Bear will be offered as a token of appreciation.

For more details of this campaign, please visit the webpage www.LN.edu.hk/oiaaa/alumni/events/GradBear. 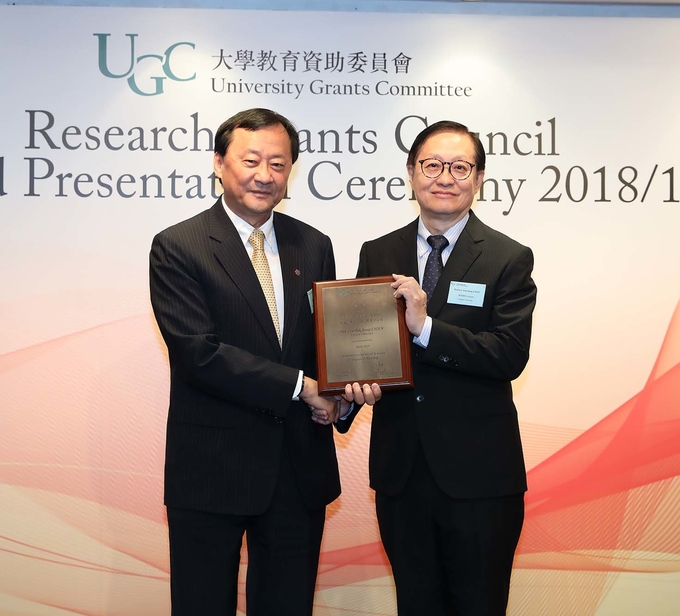 Prof Leo CHAN Tak-Hung, Professor of Department of Translation received the award of the Humanities and Social Sciences Prestigious Fellowship Scheme in 2018/19 from Prof Benjamin WAH W, Chairman of the Research Grants Council (RGC) at the Award Presentation Ceremony organised by the RGC on 25 October. 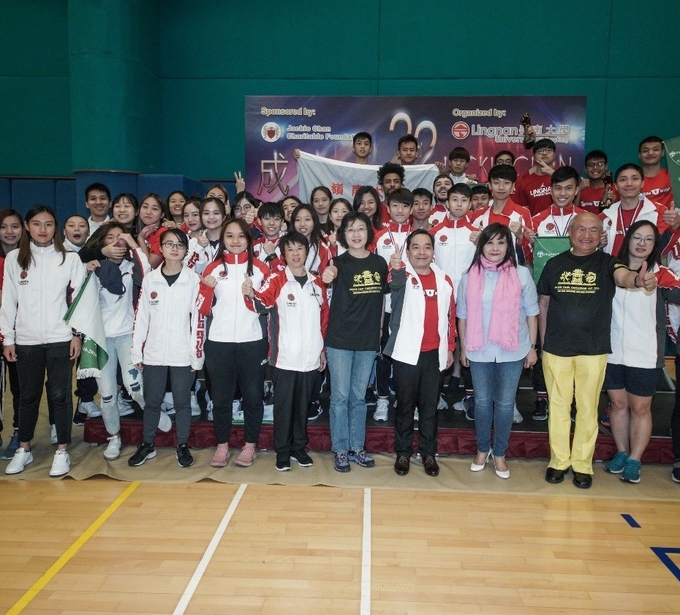 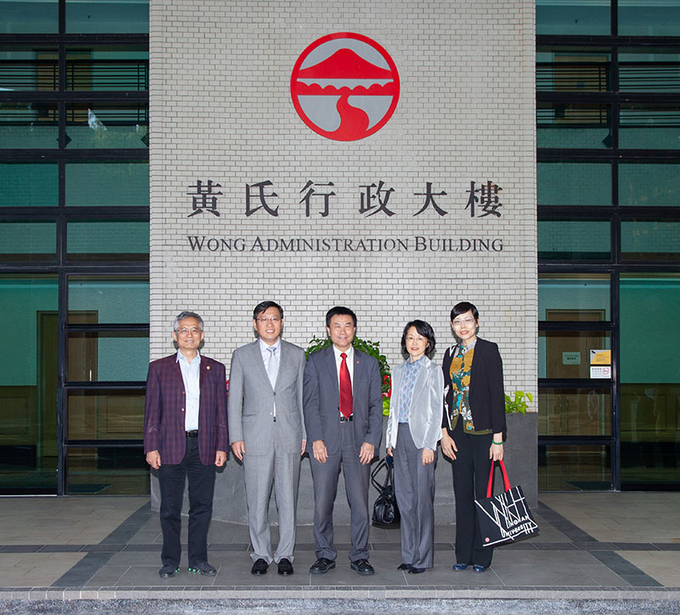 Under the Sponsored Visitors Programme operated by the Information Services Department of the HKSAR Government, Mr HONG Liang, Ambassador Extraordinary and Plenipotentiary of the People’s Republic of China to the Republic of the Union of Myanmar, accompanied by Ms WANG Xuehong, spouse of Ambassador Hong and Ms YANG Chengcheng, First Secretary and Counsellor of the Chinese Embassy in the Republic of the Union of Myanmar, visited Lingnan University on 30 October. 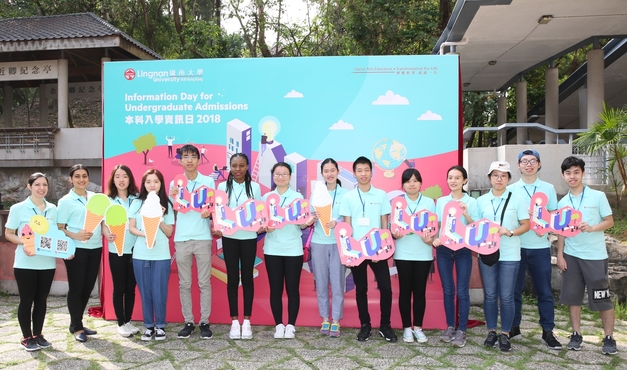 Lingnan University organised the Information Day for Undergraduate Admissions 2018 on 27 October to provide an opportunity for secondary school students, teachers, parents and the general public to obtain latest information about the University and its programmes and admission arrangements, and experience the teaching and learning environment as well as campus life of the university. 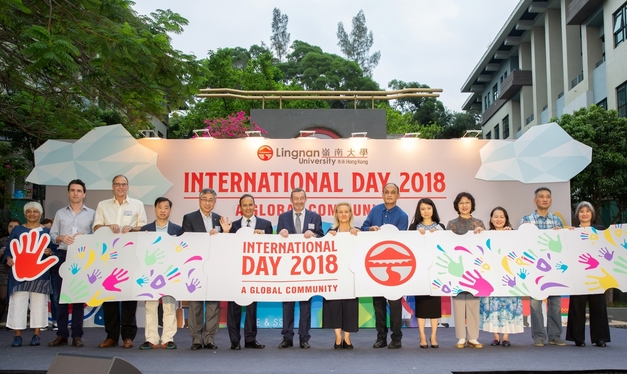 Lingnan University’s International Day 2018 was held on campus on 24 October.  It is one of the proud traditions of the University with the aim of promoting internationalisation and celebrating the beauty of cultural diversity at Lingnan. 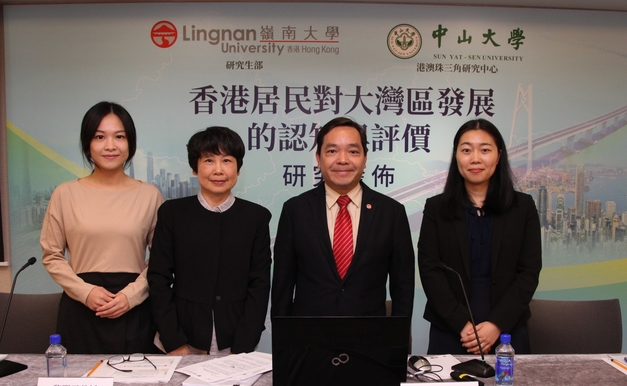 On October 23, Lingnan University and Sun Yat-Sen University jointly released a research report titled “Perception & Evaluation of Hong Kong Residents of the Greater Bay Area Development”, whose main objective was to explore the relationship between Hong Kong residents and the Greater Bay Area (GBA)*, their perception and evaluation of it, as well as their concerns about living there. In addition to the suggestion of introducing policies to promote a better understanding of the GBA among Hong Kong residents, academics from both universities also proposed new models of cooperation between Hong Kong and other GBA cities, such as the mutual execution of Health Care Voucher and Old Age Allowance. 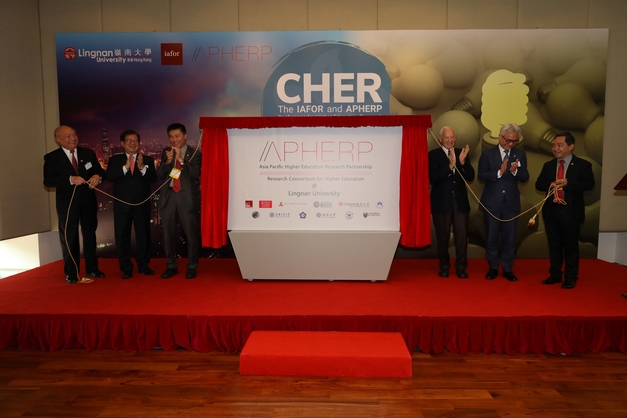 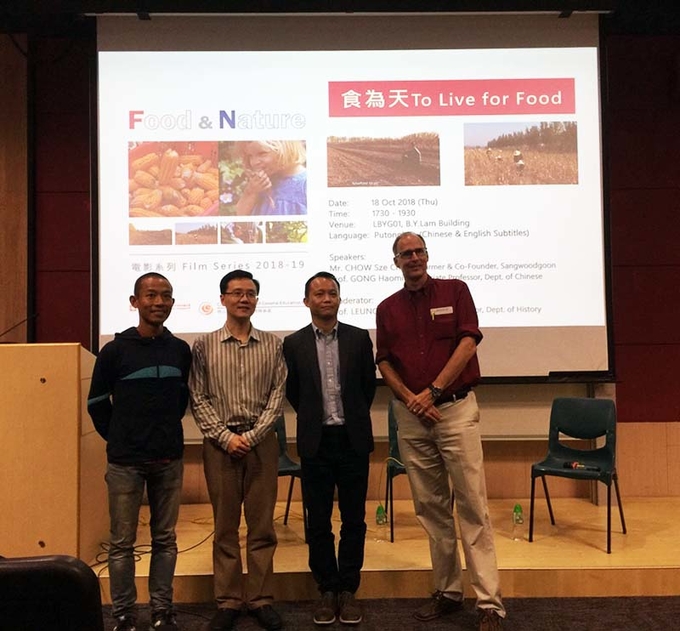 “Food and Nature” Film Series: To Live For Food

The “Food and Nature” Film Series, organised by the Core Curriculum and General Education Office and CNEX, presented its first screening of an insightful Chinese documentary To Live For Food on 18 October, attracting over a hundred Lingnan students and staff to attend. 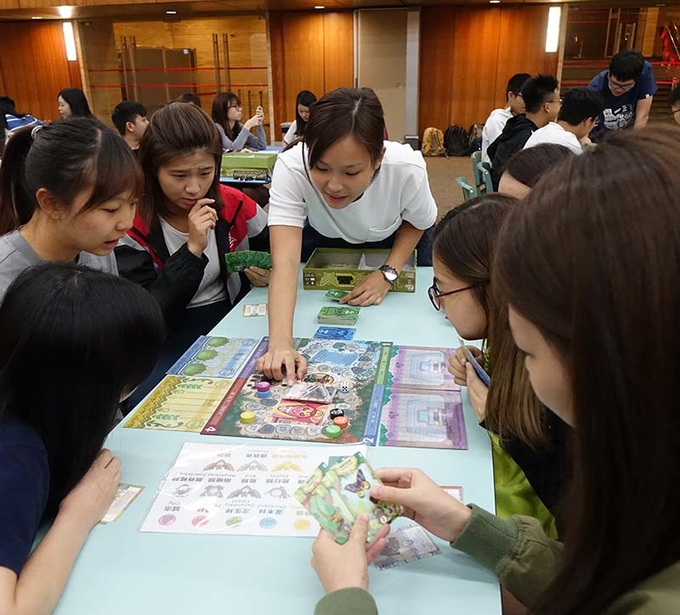 The first game-based science learning activity “‘Law of the Forest’ – Ecology Board Game Workshop” at the University organised by Science Unit and Outdoor Wildlife Learning Hong Kong (OWLHK) was held on 4 October, attracting around 70 Lingnan students to join. 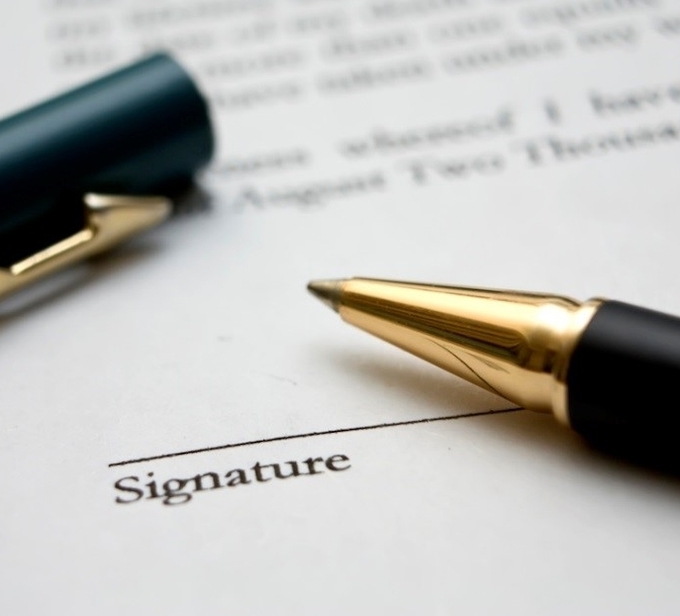 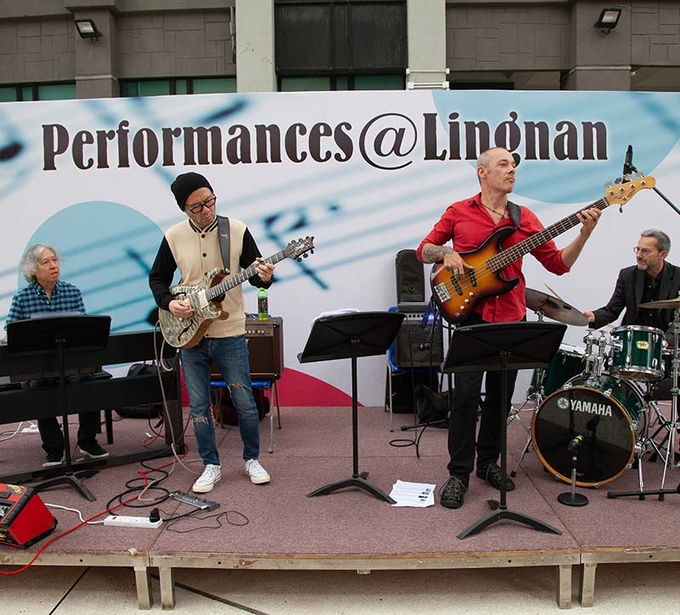 Wong Bing Lai Music and Performing Arts Unit kicked off the 2018-19 “Performances@Lingnan” series on 26 September on Lingnan campus.  The series has been part of the University’s objective to enrich the music culture and performing arts events on campus.  Lingnan was honoured to host the opening event presented by RTHK Chamber Soloists, which was recently formed to present a wide-ranging chamber music repertoire from classical selections to contemporary flavour.  Over 350 participants enjoyed the virtuosic display of the four outstanding musicians – LE Noai-Nam (violin), Laurent PERRIN (cello), John SCHERTLE (clarinet) and Colleen LEE (piano).